WEMATEKAN’IS AND THE HUNTER – Native Folklore

At last spring has arrived and it’s time to start hiking our pristine forests. But keep your eyes open for what creatures may be sharing the sweet scented woods.

Last month I wrote about the “True People” of the Poconos, the Lenni Lena’pe. While researching for the article I came across many of their traditional stories. They didn’t have a written record of their history, they relied on storytelling. These stories are colorful with charm, innocence and humor. This month, I wanted to share one of my favorites with you.  Long before JR Tolkien was telling the story of the Hobbit, the Lenni Lena’pe were sharing stories about the Wemategunis.

Wemategunis are the magical little people of the forest, like sprites or dwarves. 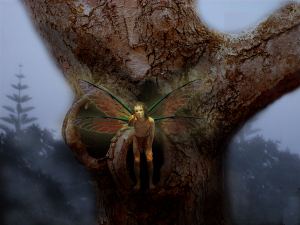 Their name is pronounced weh-mah-teh-guh-neese. They are mischievous but generally benevolent creatures, although they can be dangerous if they are disrespected. It is said that they are about as tall as a man’s waist yet have immense strength for their size, and in some folklore, they have magical powers such as the ability to become invisible. They may help people who are kind to them or tolerate their tricks with good humor. In some legends the Wematekan’is even serves as messengers of the Great Spirit.

There once was a man who was out hunting with several friends. They wandered off and left him alone, but even so he was lucky and killed a young buck. He dressed it and put it up on his back, and then he went looking for his friends. After searching for a while with no success, he whooped to call them. “Ju hu!” he called. Somebody answered, “O’ho!” The voice seemed close by, just across the valley. He ran to catch up with the person calling, but when he got there he saw no one. Then he called again, “Ju hu!” He heard and answering call, “O’ho!” from the side of the valley he had just left. Every time he crossed the valley, he would hear the voice coming from the place he had just come from. Eventually the hunter became angry. He threw down the deer and chased the person who was answering him. When he caught him, the hunter found it was a Wematekan’is, one of the Little People, carrying a bow with the bark on it. “I’ll teach you to answer when I am calling my friends,” the angry hunter said. “For that we’ll have a fight right here.” “Ke’hela! Yes, indeed!” said the little man. “I’ll fight, but wait until I take off my jacket.” 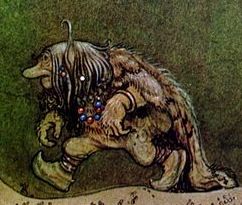 Wematekan’is took off a jacket made of cornhusk, and the hunter was ready to fight. “Wait! Let me take this jacket off, too!” said little Wematekan’is, and he stripped off another one. He kept taking off jackets until he had taken off twelve in all. Each time he took one off, Wematekan’is became smaller, and by the time the twelfth jacket was off, he was so small that the hunter was ashamed to fight him. “I won’t fight you now,” said the hunter. “But I’ll give you a name. When you get home, tell your people that someone named you Nox’kumi, Answer-Me. And now I want you to answer me this. Why did you try to fool me?” Wematekan’is laughed, “I just wanted to see how strong you were and how far you could run carrying that deer!”