In April I had written an article on a round house located in what used to be called Baoba along the towpath. I received a number of responses and some additional bits of information but still have not found a photograph of the “village” in its day. But I did meet Dr. Walter Ungerer, grandson of Molly Staab, and his beautiful wife, Janet. Walter has an impressive collection of photos, maps, books and vast knowledge on the area. He hasn’t found my roundhouse yet, but he has shared some wonderful stories of the many summers he spent with his grandmother on her farm when he was just a young boy.

Heading onto the Towpath from 590 you’ll see the Volunteer Firehouse which used to be a schoolhouse surrounded by acres of farmland, mostly dairy farms. A short distance on the right is the location for the Baisden’s Boatworks. This basin is where they built and repaired boats.  The stone walls outlining the pool pit are still clearly visible. A few feet away, along the river, the stone walls supporting the train tracks are massive and impressive. 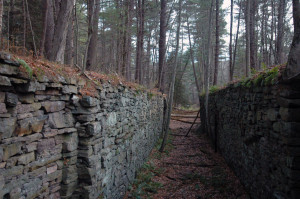 unt Moriah Cemetery. Beautiful stone walls, hitching posts and many old graves – some dated early 1800s, sit atop a stunning overlook. Having only visited the cemetery in the summer time, I was never able to see much through the leafy forest. But this time of year, the remains of the towpath are clearly present. Kimbles was a very active part of the river. In fact, several lanes operated allowing barges to park or pass. There appears to be a smaller lane for locals to have easy access through the myriad of the bustle.

The Gelderman property on the left hand side of the road was once a large farm and resort. Platform tents and a large dancehall made it a popular destination for locals as well as tourists. Walter’s dad trained for boxing in the dancehall. Fields of corn surrounded the resort all the way to the river.

Continuing along the Towpath to view Molly Staab’s house, a few miles on the right across the river, is what was called Snyder Eddy. Gone are the chicken coops, barn and outhouse. But the location is still as beautiful today as it was in the 1800’s. They didn’t have a bridge but had to boat across the river. Not an easy task. But, without the dam, the river would often be low enough in the summer to simply walk across. In fact, there was a road leading down from the mountain that was easily accessible across the river floor. 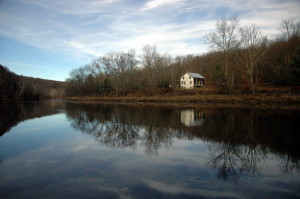 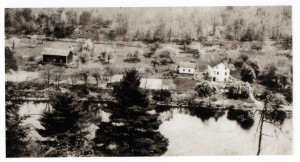 The property is now owned by the Knup family which also owns The Rock Cut Farm, otherwise known as The Swinging Bridge farm. In speaking with family members, it was said that the farm once served as a nudist colony. It’s interesting that there are rumored to have been several nudist colony/camps in this area. Surprising since summer nights can be rather cool and mosquitos are abundant.  It could well be the reason that the area just up from the river is referred to as Bohemia.

Further along, the property across from the river access was known as the Ferber Farm Resort, owned by Al and Grace Gore – no relation.  There were a number of resorts and hunting lodges along the river. In fact, on Chestnut Burr there once stood a hunter’s lodge that is reportedly where Robert E. Lee would stay on his way to and from West Point.

The Village of Glen Eyre was once as big and busy as White Mills which both were far more active than Honesdale.  In December of 1898 the village was sold at auction for $7,600. For $1,000 more than the mortgage and costs, Mrs. Mary T. Carpenter of Scarsdale, NY purchased the foreclosed property which included 842 acres of land, five dwelling houses, several shanties, two barns, store house, saw-mill, blacksmith shop, factory building and other outbuilding. Good water power, valuable stone quarries and railroad depot were also on the premises. All that remains of Glen Eyre today is the beautiful stone railroad bridge.

Janet Ungerer said to me, “I often wish the river could talk so she could share her secrets.” These winter months are a great time to explore the towpath. With clear views you can see right into the past.  Keep an eye out for eagles… and ghosts.