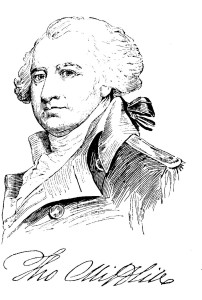 Ever since the popularity of The Office, home of the Dunder Mifflin Paper Supply Company, I have often wondered who Dunder and Mifflin were. Driving to the Steamtown Mall in Scranton, I was reminded that I was curious about this when I noticed Mifflin Avenue. So I did some research…

Thomas Mifflin (1744-1800), George Washington’s Aide-de-camp, distinguished himself by being appointed by Washington to be the first Quartermaster General of the Continental Army. He was also the first Governor of Pennsylvania and a signer of the Constitution of the United States in 1787. Mifflin was instrumental in creating the Pennsylvania State Constitution in 1790 and served two-terms in the Continental Congress.

Dunder on the other hand, was not so easy to identify. A google search turned up one woman in Canada with the last name of Dunder. According to Wikipedia, Dunder is the yeast-rich foam leftovers from one batch of rum that is used to start the yeast culture of a second batch.  And, according to the Urban Dictionary a Dunderhead is a person with no intelligence. Credit is given to The Office for creating Dunderheads across the country but in fact they only helped popularize the expression as it’s been in existence for some time and is derived from Dutch origin.

Dunder is the Dutch word for thunder.  In Dutch, Blixem means lightening.  In the 1807 story, Account of a Visit from Saint Nicholas written by Major Henry Livingston, Jr.,  the name for two of the reindeer driving Saint Nick’s sleigh were in fact Dunder and Blixem – thunder and lightning. The 1823 poem by Clement C. MooreA Visit from St. Nicholas also named Dunder and Blixem as two of the eight reindeer. The 1844 printing changed the title to T’was the Night Before Christmas. In 1949 it was changed to Rudolf the Red Nosed Reindeer and it was at that time that the Dutch Dunder and Blitzem were exchanged for the German Donner and Blitzen and added the lovable Rudolf.

L. Frank Baum‘s 1902 story The Life and Adventures of Santa Claus includes a list of ten reindeer, none of whom match the names of the versions found in A Visit from St. Nicholas. Flossie and Glossie are Santa’s principal reindeer in Baum’s story. Santa gathers eight more reindeer, named in rhyming pairs: Racer, Pacer, Fearless, Peerless, Ready, Steady, Feckless, and Speckless.

That Rudolf’s original team mates were Dutch and later German makes little difference. Rudolf is still accompanied by Thunder and Lightning as Santa and his sleigh make their way through a blinding snowstorm to ensure all the good little children receive their gifts.

Can you name all of Santa’s reindeer?

I don’t know about you, but why a reindeer is named Vixen is slightly disturbing, as is feckless. But I digress and don’t want to put a damper on the warm holiday cheer.  So, whether you are celebrating Christmas, Ramadan, Hanukkah or Kwanzaa…   have a happy, safe and meaningful holiday.

← Making Movies in and around HAWLEYWOOD
THE TOW PATH →