With the chill of winter settling in our bones, there are few ways to keep our tootsies toasty. One of those is coal.

Coal deposits are scattered around the world, but the coal from a 500 square mile region of northeast Pennsylvania is special. 300 million years ago in the Paleozoic era, our rugged mountain terrain was a humid swamp land. The abundant plant life grew, died and became decaying matter that sank to the bottom of the swamps to form a dense organic substance called peat. Over millions of years, the compressed deposits of peat became mineral layers known as coal.

In northeast Pennsylvania the ordinary process was accelerated by a violent upheaval known as the Appalachian Revolution. During this “revolution” the rising mountains literally folded over, splitting open and thrusting up rock and peat formations from deep inside of the earth. The extra pressure from this process yielded coal that was more pure, harder and of higher carbon content than any other types of coal. This coal is anthracite and over 95 percent of the Western Hemisphere’s supply comes from this special region in northeast PA. 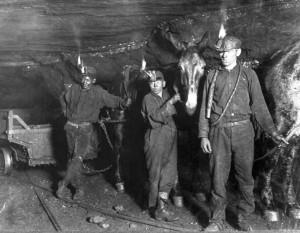 Native Americans used crushed anthracite as a black paint stone. Around 1769, Obadiah Gore, a blacksmith in the Wilkes-Barre area, discovered that anthracite could be used in his forge. In 1791, Philip Ginter, a farmer and miller, discovered a large anthracite deposit in Sharp Mountain near what is now Jim Thorpe, PA. He is generally regarded as the “Father of the Anthracite Industry.”

Anthracite was first quarried from outcrops. When quarrying became impractical, the mines went underground. Many of the early mines had only one entry/exit point. Vertical shafts frequently used a furnace at the bottom to create a flow of air to ventilate the mine. In the working areas, the coal was loaded into the cars pulled by mules to the bottom of the shaft for hoisting.

Working conditions in the early anthracite mines were obviously quite poor and wages were low. Dissatisfaction among the miners led to the creation of the Workers Benevolent Association (WBA) in 1868. Initially, it had a cooperative relationship with the mine owners and operators but that didn’t last long and the WBA disappeared within a few years.

The 1869 Avondale mine disaster in which 110 miners were killed focused attention on the unsafe conditions in the mines and caused Pennsylvania to enact the first mine safety laws. In 1870 (the first year of statistics) a total of 211 miners were killed while producing 14 million tons of anthracite. The United Mineworkers of America (UMA) was formed in 1890.

Scranton was the center of the anthracite coal industry – the largest known deposit in America was being mined in this region. In the late 1800s and early 1900s, hundreds of thousands of immigrants arrived to work the mines, German, Welsh, Irish, Italians, Polish, Slovacs, Ukranians, Russians, Lithuanians, Hungarians and Czechs.

Railroads proved the best way to transport coal and soon became prevalent in this region.  The Delaware and Hudson (D&H) Canal Company, which is prominent throughout the Hawley and Honesdale area (the museum is located on Main Street in Honesdale) built a gravity railroad, as well as a steam railroad to Scranton in 1863. 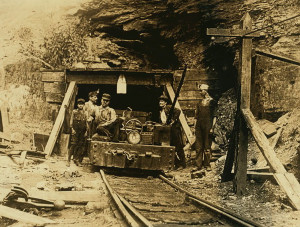 The Lackawanna County Coal Mine located in McDade Park in Scranton is a great way to encounter a coal mining experience. You will descend slowly into the earth in a mine car as you enter the old Slope #190.  At 300 feet beneath the earth, you’ll step back in time to when the anthracite coal mine originally opened in 1860.  You will accompany a miner in the winding underground gangways and rock tunnel past three different veins of hard coal, past the mule boy and the nipper, past the monkey vein and the dead chute. He explains the fascinating methods used, and the heroic efforts involved, in deep mining’s history.

The Lackawanna Coal Mine Tour is open from April 1 through November 30 and is closed on Easter Sunday and Thanksgiving Day.  So mark your calendars now and you’ll have something very special to look forward to as winter comes to a close.