From Capone to Contemporary Art

The Eastern State Penitentiary is a must-see in Philadelphia. This is a “Candy Store” for photographers. Everywhere you turn is a photo. The peeling paint and the rusty iron among the scattered debris forms a distinct and beautiful patina. The skylights and slight slits for windows in the cells create dramatic lighting. 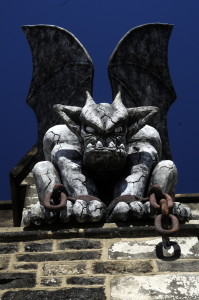 Located at 2027 Fairmount Avenue between Corinthian Avenue and North 22nd Street, you are greeted by mammoth gargoyles perched upon the ledge over the main gate. The Eastern State Penitentiary (ESP) opened in 1829. It was one of the most expensive American buildings of its day and soon the most famous prison in the world. The Penitentiary would not simply punish, but move the criminal toward spiritual reflection and change. The method was a Quaker-inspired system of isolation from other prisoners, with labor. The early system was strict. Inmates were hooded whenever they were outside their cells. It was believed that the criminals exposed in silence to thoughts of their behavior and the ugliness of their crimes would become genuinely penitent; thus the new word, penitentiary.

When gangster Al Capone found himself in front of a judge for the first time in 1929, he was sentenced to one year in prison. He spent most of that sentence in relative comfort at Eastern State, where he was allowed to furnish his cell with antiques, rugs, and oil paintings. Bank robber Willie Sutton joined eleven other men in a doomed 1945 tunnel escape. 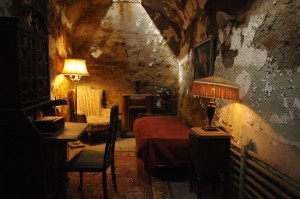 By the 1960’s, the aged prison was in need of costly repairs. After operating for 142 years, The Commonwealth closed the facility in 1971. The City of Philadelphia purchased the site in 1980. It was open in 1994 for historic public tours.

The highlight of my visit was the compelling art exhibits. My favorite installations were:

Chorus by Jess Perlitz
The artist asked incarcerated men and women from throughout the United States, “If you could sing one song, and have that song heard, what would it be?” Her recordings are played inside a cell. In the resulting “choir,” triggered by the visitor’s arrival, these voices are layered, escalating, colliding, and eventually grow overwhelming. 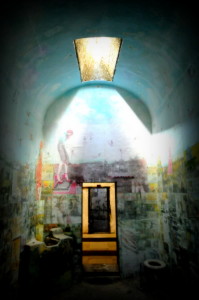 Apocalyptic :16389067 by Jesse Krimes
Philadelphia-based artist and returning citizen Jesse Krimes holds a BA in Studio Art from Millersville University. In 2009, he was indicted by the U.S. government on non-violent drug charges, labeled a “drug kingpin,” and sentenced to a 70-month prison term. While incarcerated, he produced Apokaluptein:16389067, a vast multi-panel work, established prison art programs, and worked collaboratively with fellow inmates. I was mesmerized with this installation. I particularly loved its muted colors but the design flowed seamlessly around the cell with whimsical and beautiful images.

Beware the Lily Law by Michelle Handleman
The piece uses the 1969 Stonewall Riots as a starting point to address issues facing gay and transgender inmates. The riots began after a police raid on the Stonewall Inn, a gay bar in New York City. Police arrested men dressed as women and transgender patrons. Many of the patrons resisted the police raid, and the following day thousands of people marched in the streets, speaking out about unfair treatment under the law. It was the start of the modern gay rights movement. This piece features a projected image on the far wall that is haunting and powerful.

Cozy by Karen Schmidt
“I hand-knit every square inch of Cozy. I think of knitting as time materialized. The stitches are like tick marks that an inmate might scratch into the cell wall to mark the days. Bringing comfort to a bleak, cold place makes it warm and inviting. I want to bar entry into the cell to create a sense of longing in the viewer. I want the viewer to want to enter the cell, much like the inmate must have wanted to leave it.” -K.S. There are a total of 419,879 stitches in Cozy (the bed alone is comprised of 41,998). The piece uses more than 25,000 yards of yarn. It took me a moment or two to realize that the room I was looking at was completely covered in a knitting façade! The attention to detail and how perfectly is fit was amazing. 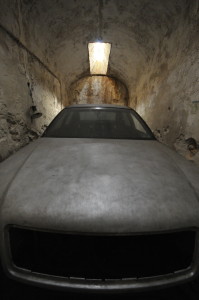 Identity Control by Tyler Held
Reflecting on the idea that a man is “too easily reduced to an object” when institutionalized, artist Tyler Held uses a car, stripped inside a cell, as a metaphor for relinquished individuality. I was “surprised” as I discovered this cell. Its unexpectedness is what struck me and made it one of my favorites. I still wonder how he fit the car in the cell.