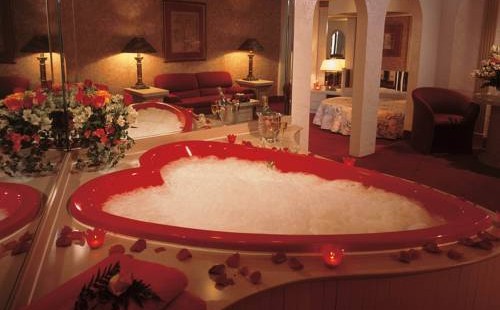 BIRTH OF THE HEART SHAPED TUB

A DESTINATION RICH IN ROMANCE, HISTORY AND CELEBRITIES

I can still hear the famous jingle, “beautiful Mount Airy Lodge…”  (See, you sing it as you read it, didn’t you?) That tune seemed like it aired every ten minutes throughout the late 70’s and early 80’s. It was one of the most successful advertising campaigns ever in the history of advertising! Interestingly, I had always associated that commercial with the elevation of heart-shaped tubs and its connection to the Poconos. So, as I re-viewed those commercials (thanks to YouTube) there is not one heart-shaped tub in sight.

The original Mt Airy Lodge was built in 1898. The resort was reconstructed in the 1950’s. In it’s heyday of the 1960s and 1970s, Mt Airy had nearly 1,000 rooms on as many acres. Golf, skiing, snowmobiling, horseback riding… along with a who’s who of entertainment including Bob Hope, Milton Berle, Rodney Dangerfield, Tony Bennett and more.

Along with attracting celebrities, they attracted honeymooners. The message was: if you provided the marriage license, they’d provide the preacher, a beautiful mountain setting for your wedding, and honeymoon suites with red heart-shaped bathtubs. The resort’s majority owner, Emil Wagner, is the motivator in creating the honeymoon haven. The two were so closely associated that when the resort went bust in 1999, its 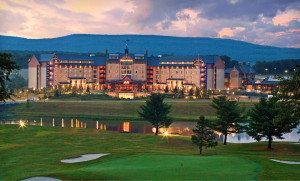 77-year old owner died with it.

Gambling in Atlantic City as well as affordable cruises began the decline in the 1980s. Purchased by Oaktree Capital in 2000 and then sold to Louis DeNaples in 2004, Mt Airy Casino Resort is now a Four Diamond AAA property.

Mt Airy isn’t the only resort that attracted celebrities. It actual began earlier at another resort, The Shawnee Inn. Built by CC Worthington at the turn of the twentieth century, it was originally a summer resort called The Buckwood Inn. Worthington hired orchestras to play every afternoon and Sunday evening. Guests could take the Ferry across the Delaware River to the New Jersey side, to visit Buckwood Park, a private park and wildlife sanctuary. But, the single most remarkable attraction was his meticulously planned 18-hole golf course designed by the famous A.W. Tillinghast.

In 1912, C.C. Worthington invited a group of professional golfers to be his guests at the Buckwood Inn. It is said, that this meeting led to the formation of the present day PGA and the first PGA Championships. Twenty-six years later, in 1938, Shawnee hosted the PGA Championships.  In this match, Sam Snead, Shawnee’s Touring Pro at the time, lost to Paul Runyon.

After World War I, the great depression occurred and this brought changes to the vacation industry. Guests were no longer summer visitors who stayed for two or three month periods. With the wide use of the automobile, they became tourists who only stayed a week or two. The Inn was a seasonal operation, only open in the summer, and this meant the revenue generated was grossly inadequate for proper maintenance. The Inn fell into disrepair. In 1943, a year before C.C. died at the age of 91, The Buckwood Inn was sold to Manawalamink, Inc, a corporation headed by famous choral master, Fred Waring. Mr. Waring renamed the resort The Shawnee Inn.

Fred Waring sold the Inn and The surrounding area to Karl Hope in 1974. (I could not determine if Karl Hope was related to Bob Hope. But I did discover that the road to Ski Big Bear in Masthope is named for this same Karl Hope.) Mr. Hope, a real estate developer, was determined to turn the Inn into a profitable business. He experimented with a new concept, resort timesharing. In 1975 he opened Shawnee Village, the first timesharing development in the state and one of the first in the country. To achieve year round status he hired Jean Claude Killy, a triple gold medal Olympic skier, to run the operations for Shawnee Mountain. In 1977, after completing Depuy and Fairway Villages, Mr. Hope sold his business interests to the current owners, Charles and Ginny Kirkwood and their family.

So where did the Heart-shaped tub originate? 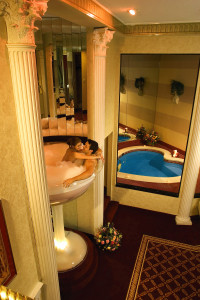 It is said that Morris B. Wilkins designed the tub in the mid-1960s to draw honeymooners to his newlyweds-only property, Cove Haven Resort. He claims that because no one made the tubs commercially, he poured concrete into the shape of a heart, tiled it in red, and put mirrors on the surrounding walls.

In 1971, Life magazine featured a photo of a couple soaking in a heart-shaped tub with their sexy parts covered in bubbles. Reservations exploded! Cove Haven worked to install more of the tubs and the design quickly found its way into other resorts throughout the Poconos.

The heart of the Poconos is part in its tubs… but mostly in its people. People like Emil Wagner, CC Worthington and Morris B. Wilkin. People who had vision, imagination and the ability to bring an idea to life.