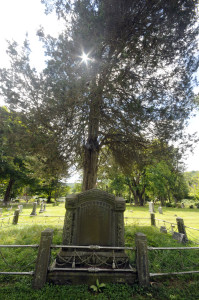 While biking the towpath, I ran into a friend, his name is Ernie. As we stopped for a breather in Mt Moriah Cemetery, I mentioned something about ghosts and spirits. Ernie asked if I believed in ghosts. “I’m not sure, but if I had to choose, I would say, yes, I do believe there are spirits or entities that exist beyond our worldly dimension or understanding.”

Ernie shared that he had recently captured an image of an orb in a photograph.

Chances are, you’ve probably seen them before–they are the curious translucent or solid circles (usually white) that appear unexpectedly in your photos. Orbs may appear in different sizes, as a single spot or as a multitude of spots grouped together. Some people believe that orbs are more than dust particles or drops of moisture on the lens–they are proof of guardian angels, captured on camera.  When these “spirit orbs” or “angel orbs” appear near a single person or a group of people in a photo, it’s a sign that they are blessed with the goodness, positive energy, and protection of angels.  When orbs appear in a particular location, it’s also a sign that angels are hovering nearby and the location is particularly blessed.

Orbs have many names including globes, globules, balls of light and hovering round balls. They appear in all ranges of brightness from bright and glowing to faded and barely visible. They are usually quite fast and follow an erratic pattern of flight. Positive orbs are believed to be the spirits of the dead. However, other theories suggest that they might be separate life forms or even nature spirits. There is no official way to determine authenticity of an orb within a photo but a few key elements to keep in mind are: A bright orb is more likely to be real than a faded one; Multiple orbs in a single photo are most likely dust motes; Orbs that are bright and show a vibrating effect within the photo are likely to be real; A slight trail is also something to look for in determining a true orb. 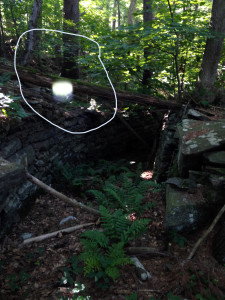 Clear orbs may be a sign that an entity is trying to communicate with you. The spirit may be trying to let the living know that some kind of significant event happened in that location, and that the spirit wants help to move on.

Spiritually, white or silver is associated with spirituality and connection with a higher source. Some investigators believe orbs that are either white or silver in appearance are an indication that a spirit is trapped on this plane. It may also be a sign that the spirit is there to offer protection to the people in the area. White energy is typically perceived as highly positive in nature.

Spiritually, many feel that black or brown colors are associated with lower spiritual vibrations or heavy energy. Some people interpret this as evil, although it isn’t necessarily the case. When black or brown orbs appear, some investigators interpret them as a sign the area may be unsafe or negative in nature. Examine such a place with caution, and if you feel uncomfortable or unsafe, leave.

From a spiritual perspective, red and orange colors are associated with safety and security, as well as a sense of belonging. While these warm colors are often associated with strong emotions such as anger and passion, this may not be the case when it comes to ghost orbs. Some paranormal investigators believe that a red or orange orb is a sign that an entity has assumed the role of a protector. This could be someone who was charged in life to keep watch or be a caretaker.

In spiritual practice, green is associated with the heart. It is also associated with nature. Green orbs are sometimes thought to be an indication of the presence of a human spirit, as opposed to one that was never on Earth in human form. Likewise, green orbs may represent love or oneness with nature.

Blue is spiritually associated with psychic energy and truth. It is a very calming color, and many people associate it with spiritual guidance. Some people feel blue orbs are sign of a calming presence or energy, while others feel they indicate the presence of a spirit guide in that location.

In Search of Orbs

A few weeks later, I decided to take my camera and see if I could locate any orbs. I was told that the best place to find orbs is in a cemetery, but both of my images with an orb were taken across the street from a cemetery. 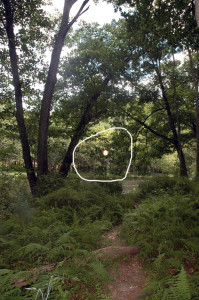 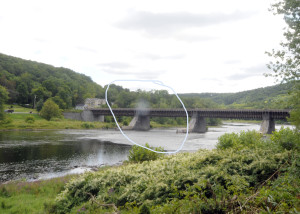 Orbs or no orbs, I happen to love cemeteries.  They are a canvas of some beautiful art. They are peaceful. They tell stories of people I’ll never meet. Names like Triphina, Maude, Minnie, Hugo, Cornelius, Lyman, Alva, Percival and Leartus. My imagination runs wild creating stories, envisioning what kind of life they might have lived. So many cemeteries in our area date back to the early 1800’s.

I leave it to you to decide if these photos show a spirit from beyond. If you have any photos with orbs, especially ones of various colors, I invite you to share them at www.PoconoSecrets.com.  Halloween and All Saints Day are just around the corner, a time when the ghosts, ghouls, phantoms and spooks are very lively. Show caution as you move among them. You don’t want to upset the spirits among us…

I read your article about orb’s. I had seen them in picture’s before. A couple of month’s ago I went to a cemetery with a friend. He wanted to show me the outdoor mausoleum where his father is. It was a very beautiful place. He then wanted to show me a gravesite. It was a Hispanic man who happened to be a singer in Indianapolis. When we walked up I had this overwhelming feeling come over me. It was a good feeling though. I felt so much love and peace right away. I don’t how to explain it. I felt it in my heart. So much energy was going through my chest and body. I looked up above us. I saw hundreds of green orbs. Some looked like they were dancing around. Some looked like they were racing around. I asked my friend if he could see them and he did. He told me not everyone can see them.I felt like love was just surrounding us. I got online to get some information about the man who passed away. He was in Mexico and doing a concert.He got murdered there. I’m not sure if he was trying to communicate with us. I have been told I have the gift. I felt like he knew that and was trying to communicate with me. I wasn’t afraid. I’ve had alot of heartache the past 9 year’s. I lost my brother to suicide 9 year’s ago. 2 year’s later I lost the love of my life to a massive heart attack. I was with him. I feel them with me every day. I’m not sure if the man who died was picking up on that.It was an experience I will never forget. I also love going to cemeteries to take pictures. On the way out we noticed a sign that said Redemption Lane. It made me cry. I felt like it was a sign that I was supposed to see.  -Jennifer S.