I stumbled upon a website containing information about Dingmans Ferry. On it, they spoke about the local grave site of Chief Thundercloud, 1856-1916; he was a scout during the Indian Wars, a performer in Buffalo Bill’s Wild West Show and a model in New York City. It is his profile that graces the Indian Nickel as well as the $5 and $20 gold piece. 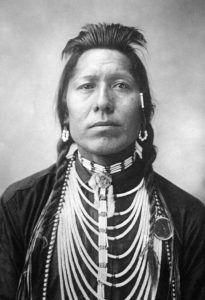 I began with a google search. I found a Chief Thundercloud who was the original Tonto. Born Victor Daniels in the Muskogee region of Oklahoma, he was the first of nine children born to Dark Cloud and Morning Star – mixed Cherokee, Scotch, Irish and German. He played the Lone Rangers faithful sidekick in the early serials as well as The Gene Autry Show. His last film was The Searchers with John Wayne. He died in December of 1955. 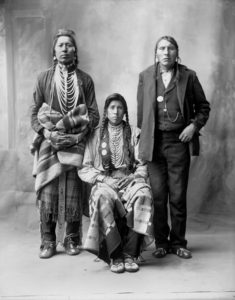 I dug deeper and finally located our Chief Thundercloud who was born Dominique La Plante in Alberta, Canada. He was of the Blackfoot Tribe prominent throughout Montana and Canada.  He was also known as James Night Rider.

In addition to his show business life with Buffalo Bill, there are reports that he was in business with PT Barnum. What an incredible man!  I began looking deeper to confirm these amazing findings. 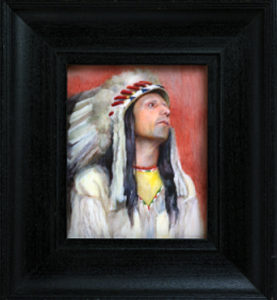 It is true that Chief Thundercloud was a model for many of the most prominent artists of the day. His portrait hangs in the National Gallery, painted by Eulabee Dix. There is nothing to support his claim as an Army scout although the years are correct for him to have done so. There is also nothing to support his performance career with both Buffalo Bill and PT Barnum, but again, the time line is correct.

It seems our Chief Thundercloud was an entrepreneur. He was inventive at a time when the American Indian was feared, subdued and misrepresented. Chief Thundercloud, aka Dominique La Plante, aka James Night Rider, learned to play the role and create a livelihood from it. 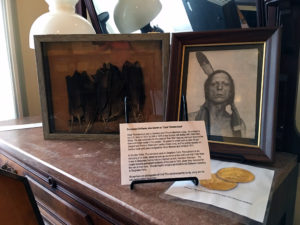 His career as a model in NY is documented. And, clearly his profile on the nickel and gold pieces is accepted as fact. Well, unfortunately that is questionable as I discovered on my visit to The Columns Museum in Milford. (On a side note, this museum is chockful of interesting items and the stories that accompany them. I highly recommend a visit.) 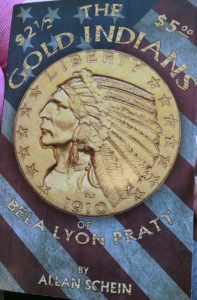 I met with Lori Strelecki, Director of the Pike Historical Society since 2000. I asked if I could see the Chief Thundercloud gold coin that I had read was on display at the museum. Lori took a deep breath and informed me that she had had recently been contacted by Allan Schein, author of The Gold Indians, a book about coins, and claimed he has proof that it is NOT Chief Thundercloud on either of the reported gold coins; which also calls the nickel into question. The Columns has a small exhibit dedicated to Chief Thundercloud that includes a photo of the gold coin but also his headdress and photos.

The Columns and Lori are dedicated to the local history and providing facts as they know them. I appreciated the candor and it seems we are right in the middle of determining the truth. Stay tuned for developments. 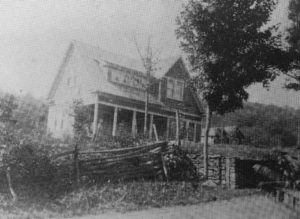 In the meantime, our Chief Thundercloud still rests in the Delaware Cemetery. He owned and operated an Indian artifact store on route 209 for many years.  The New York Times posted his obituary on March 14th, 1916. In it, they say:

Army scout and Indian model, Chief Thundercloud, the famous warrior of the Blackfoot Indians, who was a scout with the United States Army during several Indian wars, during which he played a prominent part in the capture of Red Cloud, was found dead in bed at a rooming house in Rochester, NY. His wife who lives at Dingman’s Ferry, Pike County, Penn., claimed his body and it was sent to her.

It goes on to mention several famous artists who painted him:

…Frederick Remington, Edwin Abbey, John Sargent, Howard Pyle and F.D. Millet. He served under General Stanley throughout several uprisings until leaving the service in 1876. He married a white woman and they have a daughter, Waniat, who is studying dramatic arts in NYC. 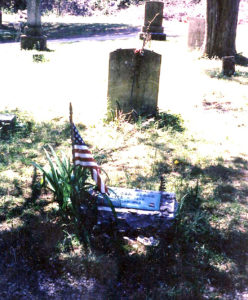 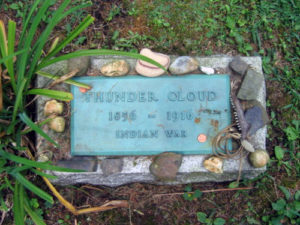 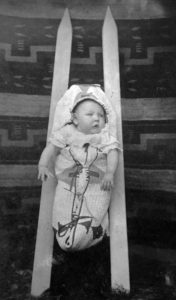 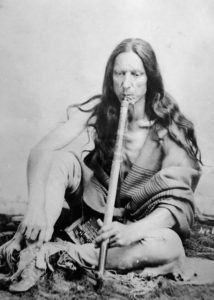 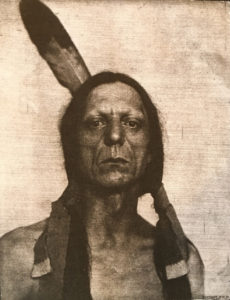 I just came across your blog while I was looking for information on
Chief Thundercloud.  I’m so thankful I found your site.
All the other sites I was looking at were about the wrong man! Let me
tell you why I was searching for him.  My great-grandfather was Steven
A. Rebeck (1891-1975).  A few years ago, our family found a 1912 photo
album of his.  In the album there were about five or six photographs of
an Indian, and on most of them was written, Chief Thundercloud.  On the
back of one of the pictures was a note that said, “Posed 4/5/10”.  I did
some further research and found a Cleveland Plain Dealer article that
stated that Chief Thundercloud had been hired by the Cleveland School of
Art as a model for the month of April.  My great-grandfather was a
student of the school at that time, and he must have bought these
pictures then.  Not sure if you are interested, but I am attaching them
here.