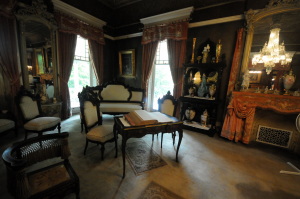 Is it true that the Harry Packer Mansion in Jim Thorpe was the inspiration for Walt Disney’s Haunted Mansion?  Here is a photo of the mansions side by side. Hmmmmmm, maybe the Disney designer was inspired by the Harry Packer Mansion, perhaps it was one of several mansions, or maybe the whole story is just a bit of local folklore. Regardless, it caught my attention and inspired me to visit and I was happy that I did.

A wedding gift from his father, Asa, The Harry Packer Museum was built in 1874. The stonework, tile

and cut glass is extraordinary.  The house sits on a hill overlooking the charming Victorian village of Jim Thorpe. The Kemmerer Park is directly across the street.  Judge Harry Packer served as President of the Lehigh Valley Railroad as well as the Schraeder Coal Company. Harry died in February 1884 from complications from a liver disease. He was only thirty-four.

In 1983 the mansion was purchased by Robert and Patricia Handwerk. The house was in disrepair when they bought it. There was no plumbing or heating and the roof was about to cave in. After many years of blood, sweat and tears it has returned to its former glory and now serves as a beautiful B&B.

The furnishings are all period and the attention to detail is stunning. You have a variety of choices in accommodations, all of which provide a sense of opulence and comfort.  In an effort to attract guests, The Handwerk’s began offering Murder Mystery Weekends thirty years ago — long before they were trendy. They continue to offer Murder Mysteries every weekend. They also offer first Friday wine tastings as well as self-guided tours. Their son Taylor and his wife Kristen also operate the B&B and opened the Libations Lounge in 2009. It is a full service bar that feature fine wines and scotches. Sipping your favorite drink on the blue stone veranda is a lovely way to spend an afternoon; you too can feel like a railroad tycoon.

The Asa Packer Mansion, located directly next door, is now a museum. Asa Packer was born in Mystic, CT. He was not from a wealthy family and worked as an apprentice carpenter and farmer. By 1833 he moved to Mauch Chunk (present day Jim Thorpe) with his wife Sarah Minerva Blakeslee and their daughter Lucy, as a canal boat owner.

Together the Packers had seven children: Lucy, Catherine, Mary, Malvina, Robert, Gertrude and Harry. By 1851 Asa Packer had acquired the majority of stock for several railroad companies and by 1853 he held control of the newly formed Lehigh Valley Railroad.

Packer’s story is interesting because he was shunned by other wealthy aristocrats of the time – the Astors, Gettys, Carnegies. The Packer’s were not born into wealth and never quite adjusted to that lifestyle. They believed in sharing what they were able to attain. Interestingly the Packers were one of twenty-six  millionaires living in Mauch Chunk at a time when there were but twenty-six in the entire country between 1830-1860. 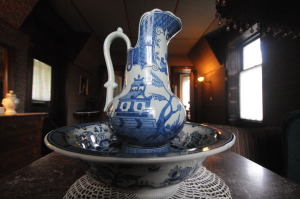 In 1865, Asa Packer founded Lehigh University. Packer donated $500,000 and 60 acres in Bethlehem, Pennsylvania, for a technical school for the professions represented in the development of the Lehigh Valley.  For the first 26 years of Lehigh’s existence, the university was tuition-free.

Packer also took an active part in politics. He was a member of the Pennsylvania House of Representatives, county judge of Carbon County under Governor David R. Porter, he served two terms as a Democratic member of the U.S. House of Representatives, and he made an unsuccessful bid for the Democratic Party’s Presidential nomination in 1868. He got the party’s nod for the 1869 Pennsylvania Governor’s race, but lost the campaign to John W. Geary by 4,596 votes, one of the closest statewide races in Pennsylvania history. 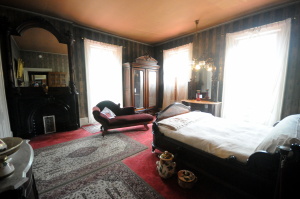 Upon the death of Mary Packer Cummings in 1912, the home was willed to the Borough of Mauch Chunk. The borough, not certain what to do with the home, closed it and for 44 years the home sat idle. Through the efforts of the Jim Thorpe Lions Club, on Memorial Day of 1956, The Asa Packer Mansion Museum was opened for tours. The house contains the original furnishings. It was listed on the National Register of Historic Places in 1974, and was further declared a National Historic Landmark in 1985. 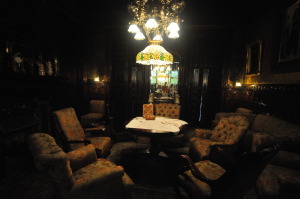 I met with Ava M. Bretzik, the Director and Historian of the Mansion Museum.  Ava has been a guide and historian for nearly forty years. Clearly her passion and enthusiasm is shared by her team of guides who lovingly care for this beautiful museum. Beauty is in the details. Some of the highlights are the vintage Louie Vutton travel trunks worth an estimated $45,000, the original intercom system, the stunning glass and tile work, original furniture, art and collectables. The magnificent Welte Cottage Orchestrion – Model D is a delightful treat. The sound is so rich. The Smithsonian also has a Model D but theirs does not play. It is a treat to the ears. Close your eyes and you’ll feel like you are standing in the center of a large carnival; then imagine those who created this amazing piece of musical technology over 150 years ago.

I encourage you to visit the Asa Packer Mansion Museum. You can visit them online at: www.asapackermansion.com, or call 570.325.3229.  It is a true treasure found among the secrets waiting to be discovered… in the Pocono Backroads.