The Round House of Laxawaxen.

Did Al Capone hide out in Lackawaxen? 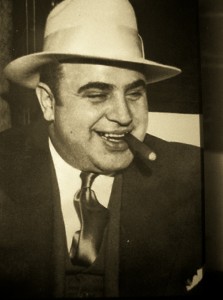 I love to hike. I am very fortunate to have great hiking trails right outside by backdoor. In fact, it was about two years ago that myself and my neighbors discovered a beautiful trail through one of our other neighbor’s yard. Once you climbed over a few felled trees and made your way through some high grass you suddenly found yourself on a clearly marked trail that once served as a township road. The trail leads past beautiful cascading waterfalls that actually roar in the spring and after a good rain.

Making our way down and up and down again along the trail one can continue straight and head toward the Lackawaxen River or cross the stream and head up the neighboring mountain. Along the trail which was also a former road which is much more clearly defined, we discovered the ruins of what looks like a “Round House”. The circular stone foundation still supports a beautiful stone fireplace but not much more. There is evidence of a stone stairway leading from the river side up to the house. By the looks of the foundation there were several rooms are off to the side as well as what looks to be a barn or garage area.  Separate from the “house” is a stone walled cave-like hole with a large flat slate bench that maintains a constant flow of water from a stream overhead.  Is it a kitchen? Is it bathroom? What was this place? 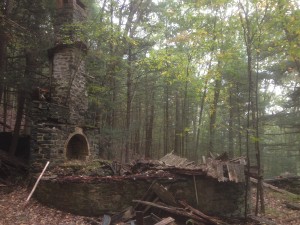 the round house at baoba

I started asking everyone I met who had a history with the area. One neighbor recalled a baby grand piano that sat atop the ruined timbers of the rounded area in front of the fireplace. This was collaborated by other area residents who grew up here in the 60’s and 70’s.  This led to the claim that the building was a House of Pleasure for the lumberjacks or miners sometime around the turn of the century.  The second theory was that it was a nudist colony. In fact, several locals were in agreement on this notion. Apparently, the area was a favorite of nudists. The old farm on the Towpath with the rope bridge was also a nudist colony at one time. I have to say I am not so sure this area loans itself as an ideal location for nudist between the cool temperatures and mosquitos but, I digress.

I checked with the tax office and there was no record of any buildings where these buildings were located. I called the current owner of the property. He informed me that he had purchased the land from Charles Capone, brother of the notorious, Al Capone. It is rumored that Al spent his summers (or in hiding) in the Lackawaxen area and specifically at that very location. The owner also indicated that a few years earlier the grandson of Molly Staub – one of the oldest residents along the Lackawaxen River, had contacted him saying that he had old photos of that property.

Since that time I have reached out to several long standing families in the area and no one seems to know anything about this house or of any existing photos or postcards of the collection of buildings in its day.  The property is located between the Towpath and Engvaldsen Road.  It looks as though it may have been built around 1900 – 1920. Electricity was added in the 1940’s.  I would be very grateful if anyone out there has any information to share and help solve one of our local History’s Mysteries.